Posted on April 13, 2019 by Latest News and Photos from the Church of Ireland Diocese of Cork, Cloyne and Ross

‘Who wants a thousand dollars?’ That is the question Andrew Coleman, Church and Community Officer in Cork for Christian Aid Ireland, asked the members of the Douglas Union of Parishes Confirmation Group at a special Lent Lunch they hosted in the parish on Sunday 7 April. What is more, he was so impressed with their fundraising efforts that he gave each of them a thousand-dollar bill!

Earlier at the morning service in St Luke’s Church, Andrew, who is also a diocesan lay reader assisting in the parish, spoke about the current crisis in southern Africa in the wake of Cyclone Idai.

Holding up a bottle full of rich red soil from Malawi which he collected while on a visit there several years ago, he reflected on the link between the dry soil and the flooded land.

As I watched the reports coming over last week of the huge devastation and destruction by Cyclone Idai in Southern Africa, one poignant image stood out for me.

It was a group of stranded defenceless people (men, women and children) cowering for safety on top of a bus, as a South African helicopter hovered to rescue them, in a new wilderness of a newly created lake that had previously being a road and a countryside of red rich soil now covered by water.

That red southern African soil, as exemplified in the empty Malawian water bottle, is a rich Iron enriched soil, suitable for farming, however due to the cyclone, thousands of hectares of farmlands are under water which means no harvest this year for millions of people. Where droughts and the lack of rainfall are an annual feature of the struggle for many communities in Malawi, Zimbabwe, Mozambique, now because of the tropical storm and rainfall of Cyclone Idai, over 2 million people have being affected. Some have lost their lives, others have lost their homes and communities have seen the complete destruction of their crops. 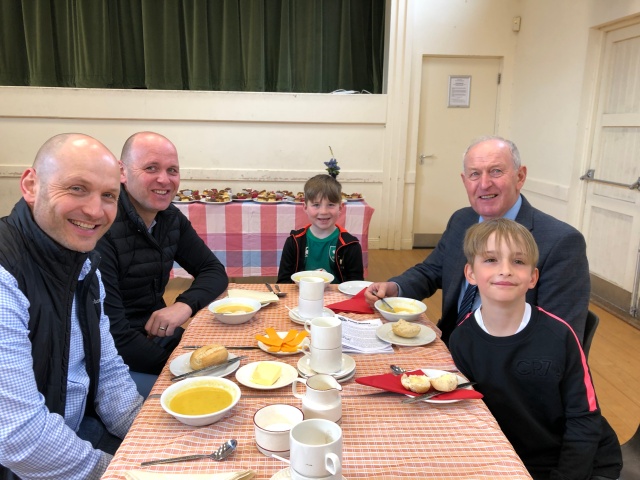 Three generations of one family enjoying the Lent Lunch in Douglas

Every year as part of the confirmation preparation process, the young people host a simple ‘Lent Lunch’ of soup and rolls for parishioners, who are asked to donate what they would regularly pay for their Sunday lunch to a charity of the young people’s choosing. This year they, along with their parents, raised €580 for relief work in southern Africa being supported by Christian Aid and for other development work in Zambia.

Parents on hand to help out.

At the lunch Andrew Coleman, as a gesture of his appreciation gave each of the eighteen young people in the Confirmation Group, a thousand-dollar bill. However, he also showed them a million, billion and trillion-dollar bills, all from the Reserve Bank of Zimbabwe.  He went on to explain that due to hyperinflation in that country in recent years, their currency became worthless and so millions of dollars were required just to buy a loaf of bread. Andrew reminded them that while some disasters are natural and just happen, others are man made and still bring suffering to many people. Hopefully, as the candidates look forward to their confirmation after Easter, their thousand-dollar bill will remind them of the fact that as Christians, we are all called to respond positively to human need where ever it occurs.

Andrew Coleman of Christian Aid in Cork with some of the Douglas Union of Parishes Confirmation group 2019.