Posted on November 8, 2017 by Latest News and Photos from the Church of Ireland Diocese of Cork, Cloyne and Ross

Midleton College, a Church of Ireland second level school in Cork, Cloyne and Ross, was founded on 23rd October 1696.  On Founder’s Day this year, 23rd October, two significant events took place in the presence of the Bishop of the Diocese, the Right Reverend Dr Paul Colton, Minister David Stanton, T.D., and a large gathering of invited guests, including past members of staff, students and teachers, and former Principal, Simon Thompson.

The Cairns Playing Field, which was resurfaced in recent months, was re-opened by Mrs Katherine Cairns, wife of the late former Principal, Mr Brian Cairns.  First year students and some of the school’s star hockey players former a guard of honour.

The guests then proceeded to the site of the new sports complex which the Board of Governors has decided to name in honour of the memory of, and contribution to the College of, the late Professor Trevor West.  Mrs Maura Lee West was in attendance and she turned the first sod of the project.  Bishop Colton blessed the project and the workers who will build the new Trevor West Sports Complex during the months ahead.  A guard of honour was formed by hockey and rugby players from the school. 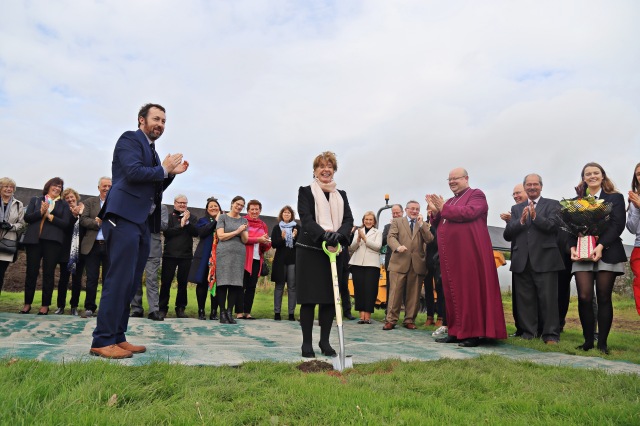 Afterwards everyone adjourned to the College Dining Hall for Founder’s Day lunch.