Posted on September 14, 2017 by Latest News and Photos from the Church of Ireland Diocese of Cork, Cloyne and Ross

The ‘Sam Maguire Community Bells’ in Dunmanway, County Cork rang out their message of hope and reconciliation for the first time at a special celebration of thanksgiving on Saturday, 9th September.  The bells project, the visionary idea of the local Church of Ireland rector, the Reverend Cliff Jeffers, have brought the local community and many others from further afield together, in common purpose in the wake of last year’s commemorations of 1916, and in anticipation of the coming centenaries in Ireland of the War of Independence and the Civil War.

Sam Maguire, a member of the local Church of Ireland parish in Dunmanway, is a figure rooted in the history of that period, and his name is linked with modern day celebrations in the world of sport; his name is given to the All-Ireland Football Trophy. 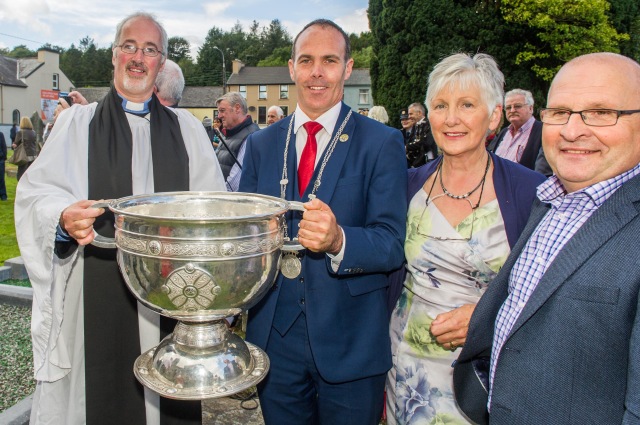 Pictured holding the Sam Maguire Cup are the Rev. Cliff Jeffers; Cllr Declan Hurley, Cork County Mayor; Jo O’Donovan (whose grandmother was one of the Maguire family), Timoleague, and George Maguire, Dunmanway who is a direct descendant of Sam Maguire. Photo: Andy Gibson.

The bells – six restored and two new ones engraved with Sam Maguire’s name and dates (1877 to 1927) – were installed during the summer and, at the ceremony on Saturday, 9th September, the Bishop of Cork, Cloyne and Ross, the Right Reverend Dr Paul Colton, was joined by the Bishop of  Cork and Ross, the Most Reverend Dr John Buckley, and the Reverend Greg Alexander of the Methodist Church in Ireland, as well as Archdeacon Adrian Wilkinson, the Very Reverend Ted Collins, P.P., and local Lay Reader, Sam Jennings.

The large local attendance was led by the Mayor of the County of Cork, Cllr. Declan Hurley, Jim Daly, T.D., Minister of State at the Department of Health, Margaret Murphy O’Mahony, T.D.  and Michael Collins, T.D.  The President of the GAA, Aogán O’Fearghail was also present, read a prayer, and after the Church Service delivered an oration at the graveside of Sam Maguire.  He referred to the vision of the project as it is articulated by the Reverend Cliff Jeffers as ‘an opportune time to begin a process of healing, reconciliation and forgiveness’ and to Sam Maguire as ‘a complex character’ who throughout his life found himself as ‘an outsider’. The President of the GAA then laid a wreath on Sam Maguire’s grave. 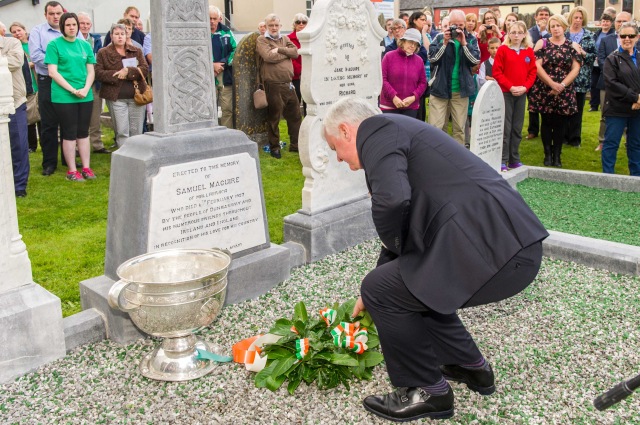 Aogán O’Fearghail, GAA President, laid a wreath on the grave of Sam Maguire. This is the 90th anniversary of Sam Maguire’s death. Photo: Andy Gibson.

The theme of reconciliation had been set also in Bishop Colton’s sermon (found here). Referring to the historical background of the period and to the forthcoming centenaries he said that Christians are called (in the words of Saint Paul) to ‘a ministry of reconciliation.’

Let us be under no illusions about the huge significance of what the Rev Cliff Jeffers and this community here in Dunmanway have put in place; what we are opening today. In a prophetic way, from within this place (contentious in its own history) they have put down a marker of what the character of the coming centenary commemorations should be – reconciliation.  This project has set a tone that others, locally, regionally and nationally might do well to note and to emulate as we prepare: a note of reconciliation; a note of cooperation and partnership; a note of dialogue; and a note of opportunity of community building for the future.

Each of the bells has been named with a theme telling the story of Sam Maguire and his hometown. The themes are Sport, Wars and Revolution (Peace), Agriculture, The People of Dunmanway, Migration, Religious Traditions, Education and Arts, and finally Industry and Commerce.

‘I was quaking when I went to the Bishop with this slightly mad idea,’ says the Reverend Cliff Jeffers, ‘but he supported me.’  Cliff Jeffers said:

After last year’s 1916 centenary commemorations, the Rev. Cliff Jeffers raised the question of how West Cork would face the challenge of the centenary of the Irish War of Independence and Irish Civil War, both of which had had a great impact on the local area. Many local families from different backgrounds were deeply affected by the violence of this war.  Although nearly 100 years have passed since these events took place, the retelling of them is going to rekindle memories of past injustices which need to be dealt with both sensitively and honestly in order to bring healing and not further division. Now is an opportune time to begin a process of reconciliation, healing and forgiveness.

After Saturday’s commemorations, everyone was welcomed to the local GAA Club – Doheny GAA – where tea was served and speeches of thanks were made by the Mayor of Cork County, the President of the GAA, David Taylor of the Irish Changeringers’ Association, Bishop John Buckley, the Reverend Cliff Jeffers and Bishop Colton. The only note of discord on the day (a humourous note) was at Doheny GAA when Bishop Colton referred to his own local GAA Club: Castlehaven! 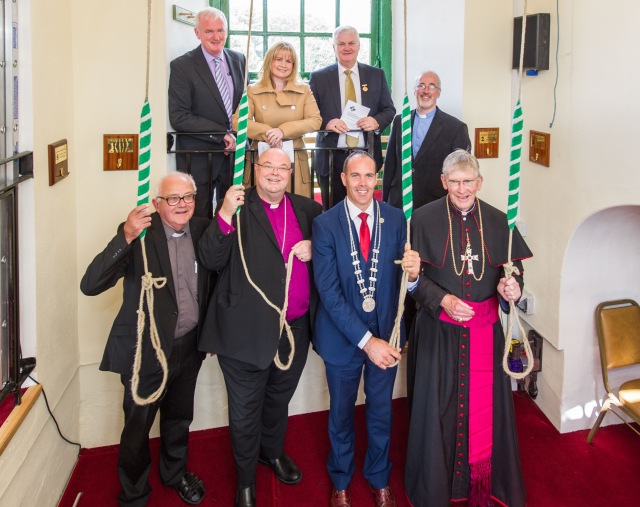 This entry was posted in Anniversaries, Bells, Bishop, Church in Society, Community Involvement, Decade of Centenaries, Diocese, News Release, People from Cork, People from the Diocese. Bookmark the permalink.
%d bloggers like this: