Posted on November 14, 2016 by Latest News and Photos from the Church of Ireland Diocese of Cork, Cloyne and Ross

At the invitation of the Cork Branch of the Royal British Legion, the Bishop of Cork, the Right Reverend Dr Paul Colton, delivered an oration at the Cork War Memorial, South Mall, Cork on Sunday, 13th November.  The occasion was Remembrance Sunday in this centenary year of the Battle of the Somme.  A very large attendance from around the City and County of Cork gathered.  David Daly, President of the Cork Branch of the Royal British Legion presided. The Deputy Lord Mayor of Cork, Councillor Kenneth O’Flynn, the Deputy Mayor of Cork County, Councillor Joe Harris, together with David Stanton, T.D. Minister of State at the Department of Justice and Equality, and representatives of the Defence Forces, Naval Service and An Garda Síochána were in attendance. 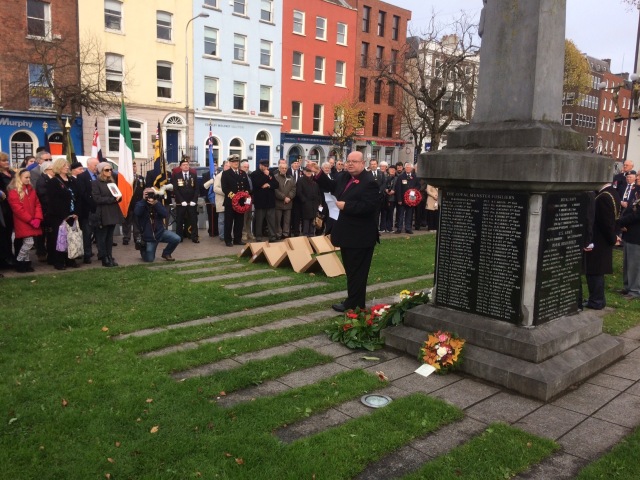 The Right Reverend Dr Paul Colton, Bishop of Cork, delivers an oration at the War Memorial in Cork on Remembrance Sunday.

Here is the text of Bishop Colton’s oration:

We will remember them.  But, will we?  And why are we remembering?  And what does remembering demand of us today and tomorrow?

Those are big questions.  If widespread trends in political, social and economic life, illustrate anything, one thing is that it is becoming harder and harder to get people to see things in terms of big questions.  Much is about me and what I think, and what I want for me and mine.  There again, perhaps I’m in a situation where life or in circumstances have driven me to think that way.

It’s easier to think local.  And so I begin at 23 Grand Parade – around the corner – beside the entrance to the market.  Surely that is local enough?

Thomas O’Meara was 19.  He lived there with his grandparents.  He was a private with the Gordon Highlanders.  Hr was killed on the first day of the Battle of the Somme and buried with others in what was a support trench at Mametz – now the Gordon Cemetery.  There were 25 others like him from Cork that day at the Somme: from Baltimore, Douglas, Cobh, Fermoy, Mallow, Kinsale, Enniskeane, Midleton, Bandon, Innishannon,  Broadford and in the City: Military Road and North Mall.

The Somme – around that corner there!  How it affected that street, that week when the news came home!  We put ourselves in their shoes – a 19 year old son and grandson.  Is there any 19 year old here?

But not only that corner – corners all over the world and corners in millions of lives – ghastly corners and hidden corners that would be cordoned off and closed, not least here in Ireland, for almost a century.  Many veterans and their families died without ever talking about these corners of their lives.  We are left with the memories – in the truest sense – the souvenirs.

My own grandfather  – Sam Colton – was 19 that year.  I have his photograph still – in shorts, stripped to the waist, youthful – a Protestant lad from an inner city Dublin slum holding a bunch of bananas in a world away; by now that year, he was with the Army Ordnance Corps alongside the King’s African Rifles in East Africa.   The man who was then married to the woman who would become my grandmother – he was at the Somme at Thiepval.  He lived to fight with the 9th Inniskillings at Messines, Langemarck, Ypres only to be killed in action on the first day of the Battle of Cambrai  – next Sunday – 20th November – one year later.  Today I carry with me a lace and embroidered handkerchief he had sent to the bride he had married before ‘the big push.’  ‘A souvenir from France’.  100 years on it is indeed a souvenir in the truest sense:  a keepsake, a memento, and a token of remembrance.

We are here to remember: and not only the Somme that year:  Verdun, Isonzo, Mesopotamia, and Jutland. Yes, Jutland, John Francis Collins, from Church Street in Douglas Village in Cork, yards from where my own wife lived in later years.  John was a stoker – first class –  on the battlecruiser HMS Indefatigable. The ship was hit and sank at 4.03 a.m. on 31st May 1916. John was 24.

We are here to remember.  There is nothing to celebrate or to rejoice in.  This is not glorious.  It is hell on earth on a vast scale; it is deeply felt personal hell for countless homes and lives.

Remembering demands that we look at the bigger picture.  The Somme:

And what of this particular day – 13th November –  100 years ago?  On this day, at least six from Cork died at the Somme: again, around the corner – Henry McGrath (51 Washington Street); up the hill – Jack Pickering (2 Lansdowne Terrace); Harold Foster, Henry Marsh (East Ferry), Albert Sykes, and Robert Williamson (from the Cross Douglas Road).

This war was global, but it was also local and it is right that we still remembering it locally; that our government is represented by the Minister; that our city and county are represented by the Deputy Lord Mayor and the Deputy County Mayor.  As I was writing this I looked out my study window and, beyond my garden wall, I was looking at 22 Gillabbey Street.  A day or two ago in 1916 Hannah Wagner – a widow – a parishioner of st Fin Barre’s Cathedral, was being given the news that her son Thomas had been killed on 6th.

What of this day 100 years ago?  One hundred and thirty-six days into the Battle of the Somme.  Historian, Peter Barton’s, three programme documentary on BBC2 – The Somme 1916: from Both Sides of the Wire  – was insightful.

On this day, he said, 100 years ago ‘war was slithering towards another winter.’  By early November everything was mud and there was widespread pessimism.  In contrast, German morale was high.  The soldiers from the colonies were earning their tag as ‘the white slaves of the Somme’.  There was an abrupt rise in mental illness – shell shock –  self-harm, suicide and desertion rates all were increasing.

Haig was determined to assure his French allies that British aggression would be maintained.   New attacks were ordered- on both banks of the River Ancre – concentrating on sectors where the front line had not moved at all for months.  In command was General Sir Hubert Gough of the newly named 5th Army.

On 13th November  – it was a Monday that year – the attack took place at Hawthorn Ridge at Beaumont Hamel.  A huge pillar of flame and smoke – a mine – it went up on almost exactly the same spot as on 1st July. ‘The same spot’ – that in itself says so much.   At Serre troops faced the same obstacles as they had on 1st July: uncut wire, BUT this time there was waist deep mud.

And so it continued for the next 5 days,  By the following Sunday – 19th November – the Battle of Somme was said to have concluded.  That was a decision of a few years later, in hindsight.  The troops prepared for Christmas in trenches and icy dugouts. The fighting continued into 1917 and in reality that Battle only ended in February 1917 in Boom Ravine.

We are here to remember.  That which brings each of us here to remember may be very different in each case:  public duty, the solidarity of friends or comrades, personal interest or personal connection.  Now, in our time, we acknowledge the equality of suffering on all sides of such conflict.

And what  of now?  What does our remembering do to us today?  It gives us pause for thought and makes us reflective.

Should it not also make us vulnerable, so vulnerable, especially those of us of a liberal mindset, that we are disturbed – vulnerable and disturbed enough to challenge our own complacency.  Is complacency not the achilles heel of the contemporary liberal mindset  – such that we assume that ultimately all will be well? But will it?  Complacency does not take account of the fact that history risks repeating itself and that we have not learnt lessons from the past.

As the English philosopher John Gray wrote only this week, and it is hugely challenging to a liberal like myself and many like me:   ‘All that seemed solid in liberalism is melting into air  … the liberal pageant is fading, yet liberals find it hard to get by without believing that they are on what they like to think is the right side of history.  The trouble is that they can only envision the future as a continuation of the recent past.  This is so whether their liberalism comes from the right or the left.’

Our remembering therefore, should give us resolve – each one of us – resolve to challenge anything, anyone and everything that risks creating the circumstances in which any of the ghastly horrors of the past might have the remotest possibility of mutating into something horrific that might root in our time.

We will remember them.  They knew nothing of what our world would be and become.

There are questions for us in our time – for us of all outlooks – religious and non-religious, Christians of all varieties, faiths of many types, atheists with their intrinsic philosophy and value systems, humanists with their ethical philosophy of life and concern for humanity in general – all of us must build bridges, join hands, work with our difference, and try to meet minds to address these questions;  what have we become?  what are we becoming?  Or more menacing still: what do we risk becoming?