Posted on October 25, 2016 by Latest News and Photos from the Church of Ireland Diocese of Cork, Cloyne and Ross

In addition to all the routine contacts and annual visits around the Diocese of Cork, Cloyne and Ross, the Bishop, the Right Reverend Dr Paul Colton, conducts a formal and traditional Episcopal Visitation every five years.  The 2016 Visitation is well under way and on Monday, 24th October the Bishop met the clergy of two rural deaneries – West Cork and Mid West Cork – in Skibbereen.

Nothing unusual there, except that the venue for the meeting was the recently opened Ludgate Hub in what is now Ireland’s first 1gb town.

Developed in a former Bakery owned by Field’s of Skibbereen, the Ludgate Hub provides meeting rooms, breakout spaces, hot desks, meeting pods, a shared kitchen, a Google hangouts room, training space, and much more, all supported by a 1000mb fibre optic connection and 24/7 access.  The Hub is named after Skibbereen native, Percy Ludgate (1883 – 1922) who, in 1907, designed an ‘analytical machine’ – one of the world’s first computers.

After their meeting yesterday with the Bishop, and following lunch, the clergy of the two rural deaneries were shown around the Ludgate Hub by Bandon Grammar School past pupil, Callum Donnelly, who works there and is heading up Ireland’s National Digital Week based there between 10 and 12 November. 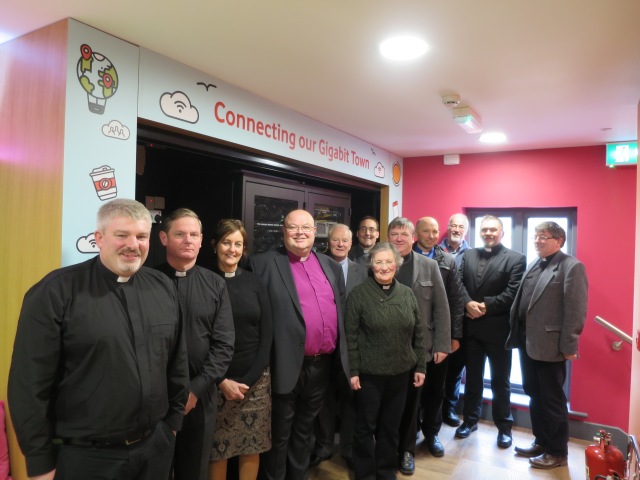 Bishop Paul Colton and the clergy of the rural deaneries of West Cork and Mid West Cork on their tour of the Ludgate Hub.

With a 1000MB connection the Ludgate Hub utilises the digital age for job creation and innovation.  The initiative aims facilitate up to 75 people in a creative co-working environment with a long term objective to create 500 direct jobs and 1000 indirect jobs via a sustainable digital economy for Skibbereen and the wider West Cork area. As featured in the case study in theAction Plan for Jobs, South West (2015 – 2017) the Ludgate Hub is cited as an example of innovation occurring in rural Ireland and indeed a blueprint for other rural areas. Skibbereen has also been selected as a pilot town for SIRO, and 1GB of connectivity is now rolled out to the Ludgate Hub and town of Skibbereen creating a 1GB community.