Posted on October 10, 2016 by Latest News and Photos from the Church of Ireland Diocese of Cork, Cloyne and Ross

The Chancellor of Saint Paul’s Cathedral, London – the Reverend Canon Mark Oakley – will be the speaker at this year’s Ballylickey Conference for the clergy of the Church of Ireland Diocese of Cork, Cloyne and Ross from Monday 10th to Wednesday, 12th October.  This is the fifteenth year in which the clergy of the Diocese have joined the Bishop, the Right Reverend Dr Paul Colton, for this two day gathering in Ballylickey, near Bantry, West Cork.

Canon Oakley was the first guest speaker fifteen years ago shortly after the publication of his book Collage of God, and he returns this year to mark the fifteenth visit, and his theme will be:  ALL PASSION SPENT? Reclaiming faith, poetry and preaching.  His most recent book, recently published, is The Splash of Words. 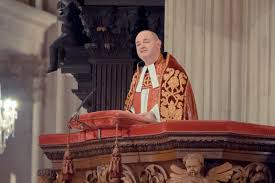 Canon Oakley was born in Shrewsbury in 1968 and was educated in London and Oxford. He was ordained at St Paul’s in 1993 and served his first appointment as Curate of St John’s Wood Church (1993-1996). He was then asked to become the Chaplain to the Bishop of London (1996-2000) and was later appointed Rector of St Paul’s, Covent Garden, known as “the Actors’ church” (2000-2005). He was also Chaplain at RADA from 2003-2005. He was subsequently invited to take up appointment as Archdeacon of Germany and Northern Europe, based in Copenhagen. Canon Oakley returned to London in 2008 and served at Grosvenor Chapel, Mayfair, before being appointed to St Paul’s Cathedral. He is also Deputy Priest in Ordinary to HM the Queen (1996-). Canon Oakley’s interests are the relationship between faith and poetry, human rights and the language and place of faith in the contemporary world. He is the author of several books, is a regular lecturer and broadcaster and is a Visiting Lecturer in the Department of Theology and Religious Studies at King’s College London. He is a trustee of the Civil Liberties Trust, an ambassador for Stop Hate UK and a patron of Tell MAMA.

This entry was posted in Clergy, Clergy Conference, Continuing Ministerial Education, Diocese. Bookmark the permalink.
%d bloggers like this: