Posted on July 23, 2016 by Latest News and Photos from the Church of Ireland Diocese of Cork, Cloyne and Ross

Agueda Cortilla Mas, from Barcelona in Spain, a past pupil of Midleton College, in the Diocese of Cork, Cloyne and Ross, is hitting the headlines alongside professional footballer Neymar Jr (Neymar da Silva Santos Júnior) from Brazil ahead of the Rio 2016 Olympic Games.

Sports journalist, Gavin Spillane, writing in the Irish Examiner, reported on Friday that she recently starred alongside Neymar in a Panasonic advertisement recorded before the Olympics.  Gavin Spillane’s full report is here.  Panasonic make an advertisement every year with Neymar Jr playing a random sport.  Agueda Cortilla Mas plays golf off a 0.5 handicap and, following auditions, she was selected. 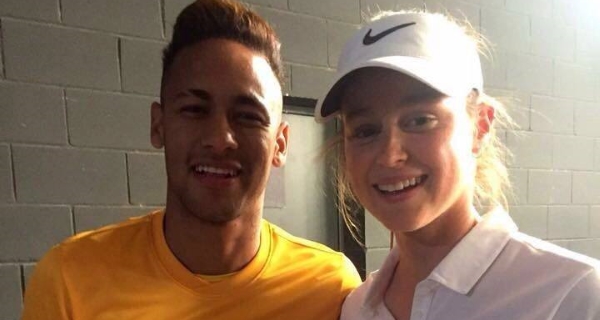 Explaining the Midleton College connection she said to Mr Spillane:

My parents thought it was important for me to learn English as it was very bad. So they decided to send me abroad because it’s the best way to learn it and I also needed to have some time off from golf. I decided to come to Ireland and I ended up in Midleton College, where I had the best year of my life. I made some of my best friends there. I even learned to play hockey and spent the last three months with East Cork Golf Club as I needed to touch a club again after six months.

The advertisement is here:

This entry was posted in Diocese, Education, Olympic Games, Schools in the Diocese and tagged Agueda Cortilla Mas, Midleton College, Neymar. Bookmark the permalink.
Loading Comments...
%d bloggers like this: