Posted on May 2, 2016 by Latest News and Photos from the Church of Ireland Diocese of Cork, Cloyne and Ross

The Bishop of Cork, Dr Paul Colton, has been appointed as an Associate Editor on the editorial board of a new journal which is to be published by Brill of Leiden in the Netherlands called ‘Law and Religion’.  It will form part of their ‘Brill Research Perspectives Series.’

Brill, founded in 1683, publishes principally in the fields of International Law and the Humanities.  It is based in Leiden in The Netherlands with an office also in Boston, Massachusetts. The Brill website is here.

Legal issues concerning religion increasingly make the news headlines these days. As a result, the intersection of law and religion is today an established but growing field of scholarship worldwide. Just as the burgeoning field whose name it shares, Brill Research Perspectives in Law and Religion seeks better to understand how the phenomena of law and religion interact and to stimulate practical debate on the diverse range of issues involved. The place of religion in society, religious pluralism, the fear of religious extremism, and the terms and limits of religious freedom generate a host of important questions on the interface of law and religion. In response, law and religion scholars themselves recognise the need for interdisciplinary approaches to this developing field. Secular laws on religion, at the international and national levels, as well as their historical, political, philosophical, sociological, and comparative analysis, all form part of the canon of law and religion. Alongside these are the religious laws and other regulatory entities of religious traditions and organisations, all shaped by their distinct theological postures. 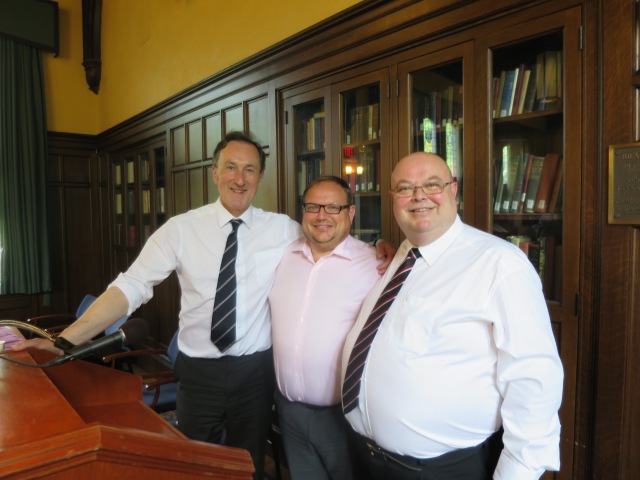 The director and two fellows of the Centre for Law and Religion in the School of Law and Politics at Cardiff University pictured in 2015 at a colloquium at Harvard University (l-r) Professor Norman Doe, Professor Mark Hill, QC, and Dr Paul Colton.

This entry was posted in Announcements, Bishop, Books and Publications, Church in Society, Contemporary Issues, Diocese. Bookmark the permalink.
%d bloggers like this: