A New Cross for the Holy Trinity Chapel in St Peter’s Church, Bandon

Posted on October 6, 2015 by Latest News and Photos from the Church of Ireland Diocese of Cork, Cloyne and Ross

A new cross was blessed in the Holy Trinity Chapel at St. Peter’s Church, Bandon during the Wednesday Eucharist on 23 September.   The oak cross was made by Mr. Pat Culleton who is Rector’s Church Warden in St. Peter’s and is also a Diocesan Lay Reader and a Lay Pastoral Assistant. Two oak candle-holders and a bookstand, which Pat made some years ago for the Chapel, were also blessed. Afterwards there was a reception in St. Peter’s Room 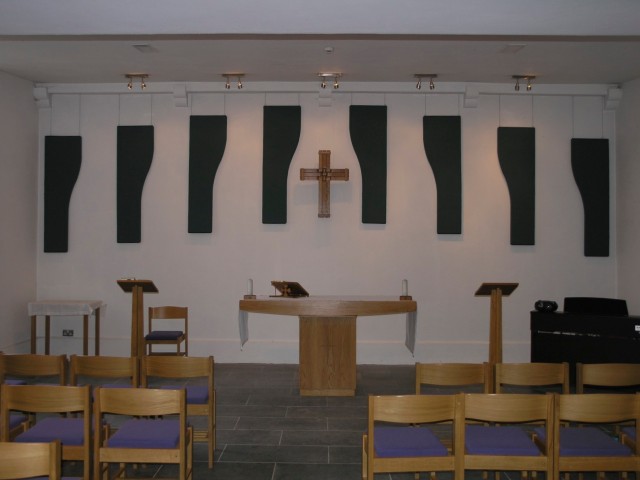 The new cross and panels, altar candles and bookstand in the Chapel of the Holy Trinity in St Peter’s Church, Bandon, County Cork

The following is Pat’s explanation of the symbolism behind his work:

The many differing strands of Christianity holding Jesus at its centre is the theme that determined the design of this cross.

The woven pattern at its centre represents the Son of God condemned to die on a cross for our salvation. The twelve strips emanating from the woven pattern represents our faith as carried by the 12 apostles and their followers north, south, east, and west around the world.

Over the past 2000 years Christianity diversified resulting in the formation of different faith practices and interpretations of the Christian message. In this cross the strips at their extremities, represents all the differing Christian faith practices present in the world. The four bands enfolding them represents the four gospels of Matthew, Mark, Luke and John on which our faith in Christ is founded, reminding us that what started out from Christ also returns to him. The symbolism of the strands is twofold in that they represent the going out and the coming back to their centre – Christ.

Pat Culleton prepares the cross for mounting on the chapel wall