Retirement of the Director of Music at St Fin Barre’s Cathedral, Cork

Posted on September 27, 2015 by Latest News and Photos from the Church of Ireland Diocese of Cork, Cloyne and Ross

On Sunday, 27th September, eight years after commencing as Director of Music at St Fin Barre’s Cathedral, Cork, Malcolm Wisener retired.  His final Service was Evensong at the end of the Patronal Festival weekend of celebrations which began with the Ordination of a Priest on Saint Fin Barre’s Day, 25th September. 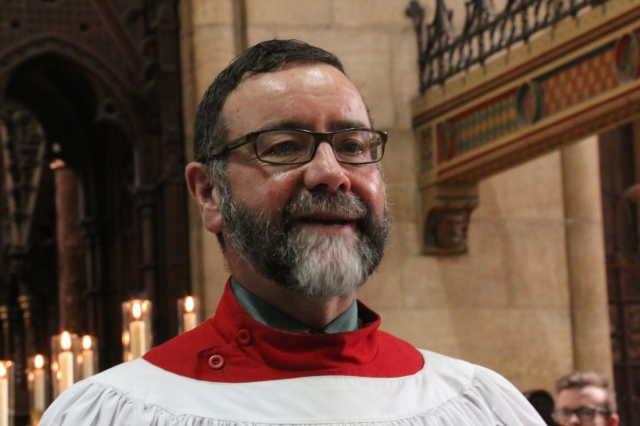 At the end of the Sunday morning Eucharist , the Dean of Cork, the Very Reverend Nigel Dunne, paid tribute to Malcolm Wisener’s tenure of the important office, as well as to his expertise and proven experience as a choral director, and in training both boy and girl choristers.  Knowing that the Cathedral organ needed to be rebuilt, the Dean said that it was fortunate that Malcolm had experience of this type of project also.  In this connection, Dean Dunne said:

A major part of Malcolm’s tenure as Director of Music has been seeing through the rebuilding and restoration of the Cathedral Organ, from first conception of the idea through to the very end of final tuning and tweaking.  Very few of you will be aware of the countless hours he spent with the organ builder here in the Cathedral, often late into the night, especially when it came to voicing and tuning the instrument – a mind-bendingly tedious task, note by note, pipe by pipe and stop by stop.  The professionalism, patience and diplomacy Malcolm showed, from inception to completion, has been incredible.  Whether dealing with criticism of the project from outside and from within, or during the dark days of financial and management issues of the project, Malcolm was probably the only one involved who managed to keep his cool and keep the rest of us on track to completion!

On a personal level, I just want to say that Malcolm has been a pleasure to work with, not only because of his professionalism but also because of his deep understanding of the role of music in liturgy.

On behalf of the Select Vestry, the Cathedral Chapter, the choir and congregation, Mary Leland, Cathedral Warden, made a presentation to Malcolm. 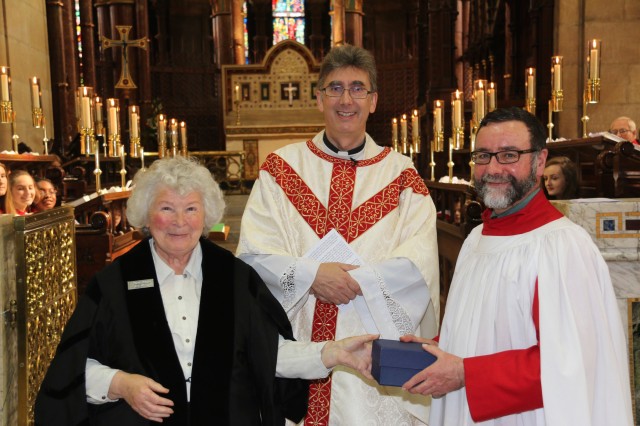 At the Cathedral presentation to Malcolm Wisener (right) were the Dean of Cork, the Very Reverend Nigel Dunne, and Mary Leland (Cathedral Warden). (Photo: Paul Colton)

Then on behalf of the choir the Head Chorister, Paula, made their particular presentation. In reply, Malcolm spoke about the fact that there has been a choir in St Fin Barre’s for more than 700 years and he expressed the hope that in that continuum of history he had made his own small contribution to the liturgy and worship of the Church. 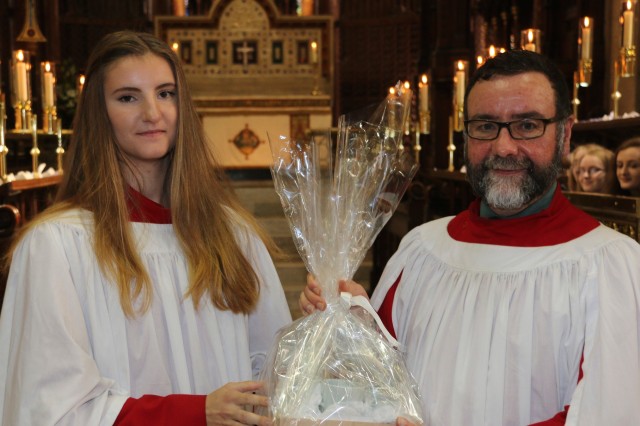 Paula makes a presentation to Malcolm Wisener on behalf of the Cathedral Choir. (Photo: Paul Colton)

That Malcolm did indeed make such an immense contribution was affirmed by the congregation, who expressed their gratitude and admiration with sustained applause.  Afterwards the choir assembled with Malcolm for a photograph, and everyone adjourned to lunch in the Chapter House and ambulatory. 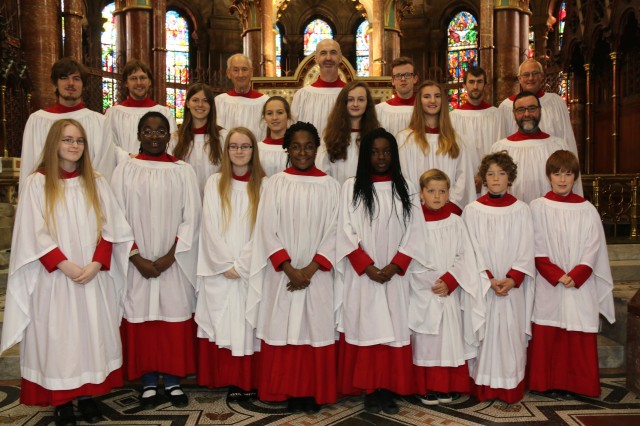 The choir of St Fin Barre’s Cathedral, Cork with Malcolm Wisener on his last Sunday as Director of Music. (Photo: Paul Colton)