Posted on May 6, 2014 by Latest News and Photos from the Church of Ireland Diocese of Cork, Cloyne and Ross

The Church of Ireland first approved the ordination of women as priests in 1990 (and the first were ordained in 1991), and the Church of England began ordaining women as priests in 1994.  Among the first was the Reverend Eileen Cremin who is rector of Fermoy in the United Dioceses of Cork, Cloyne and Ross.   Eileen was ordained in St Paul’s on 17th April 1994, when she was ministering in London Diocese prior to her arrival in Ireland.

In glorious sunshine on Saturday 3rd of May 2014, 700 of the women who were the first to be ordained priests in the Church of England, gathered with their families, friends and supporters at St Paul’s Cathedral in London for a special service to mark 20 years since their ordination.  The Reverend Eileen Cremin joined them. 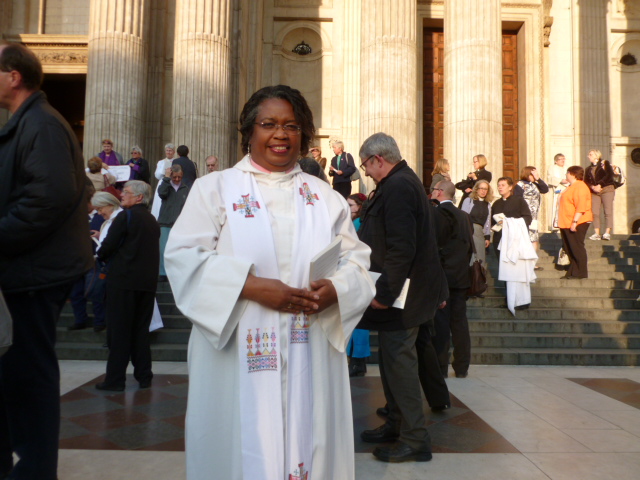 What a day! It began with a Walk of Witness, when many of the women gathered with a huge crowd at Westminster Abbey to begin the hour long walk to St Paul’s. Many carried banners, including a group of Roman Catholic women who were still waiting in expectation that one day they would be given the opportunity.

It was an amazing day, full of laughter and joy, as many were reunited with old friends. When the procession arrived at St Paul’s, the 1994 ordinands went to robe in the crypt, then gathered, dressed in albs and white stoles, for a group photograph with the Archbishop of Canterbury, The Most Reverend Justin Welby.

We then entered the cathedral, where the rest of the congregation had already gathered, to be greeted by a very long round of applause. It was so moving! People were cheering, many with tears in their eyes, as we filed into our seats under the dome.

The service was also relayed via a large screen in Paternoster Square at the side of St Paul’s to a huge crowd who were unable to fit in the cathedral.

For me (Eileen) the service was very special and evoked wonderful memories of my ordination in 1994, which was also at St Paul’s. Having been away from London for 13 years, it was so good to be reunited with many of those who were my colleagues in ministry from the very beginning, and those I trained with. It was great also to meet up with Reverend Judith Hubbard Jones, originally ordained in Hereford diocese, but one time Rector of Kinneigh Union.

The service was a Sung Eucharist; the President was the Rev Canon Philippa Boardman (Canon Treasurer of St Paul’s), fellow 1994 ordinand with me in London diocese. The Deacon (and preacher) was the Archbishop of Canterbury, who took the opportunity during his sermon to apologise to the women priests, for what they had endured (and in some cases suffered) during the long road to ordination, and since. The service also contained testimonies from the Very Reverend June Osborne, Dean of Salisbury, and the Reverend Kate Boardman, Assistant Curate of St Mary’s Heworth. We also remembered many of those women who were unable to be at the service due to illness or disability, or who were mow ministering overseas; also those women who were ordained in 1994 and have since died.  After the service, to celebrate the anniversary, the St Paul’s Cathedral Guild of Ringers rang Stedman Cinques.

One of the ‘stand out moments’ for me was when we all sang the first hymn, and for the first time in a very long while, all I could hear was the sweet sound of lilting soprano voices, echoing round the cathedral like a choir of angels! It was also the first time that I had been present at a major service in the cathedral where a woman presided at the Eucharist. It was very special. It was a day I shall never forget, and all the more special for me to share the day with my beloved husband Tom. 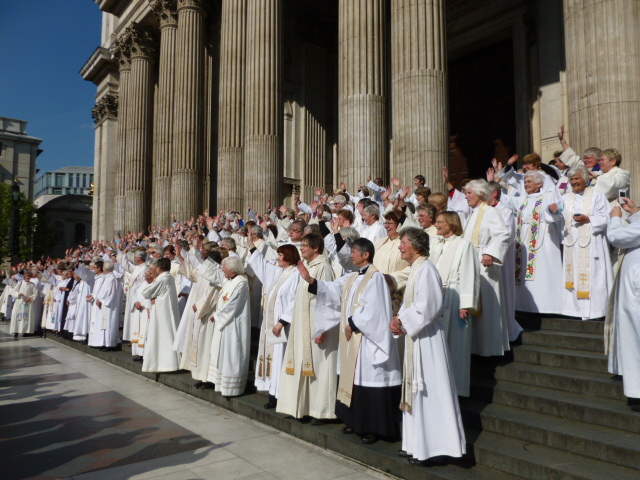