Posted on July 12, 2019 by Latest News and Photos from the Church of Ireland Diocese of Cork, Cloyne and Ross

In 2020 the current William Burges Cathedral building in Cork, Ireland will be 150 years old. As part of its celebrations and to commemorate this anniversary, St Fin Barre’s Cathedral invites all composers to enter the 150th Anniversary Composition Competition.

This award of €2,000 is for the commission of a new set of Evening Canticles, Magnificat and Nunc dimittis, written for the Cathedral Choir and the Cathedral Organ.

The new work will be premiered at the opening Festival Service of the 150th anniversary year on Sunday 29th November 2020 at 4pm in St Fin Barre’s Cathedral, giving the composer a platform to showcase their talent. The work will also be recorded by the Cathedral Choir and Organ on their new CD, which will be produced earlier in the year and launched on Friday 25th September, 2020.

St Fin Barre’s Cathedral Choir, composed of 35 children and 8 adults, has been part of Cork’s culture and tradition since 1328. The service of Evensong forms a central part of the Anglican tradition and is sung twice a week in the Cathedral, at 6.15pm on Fridays and at 3.30pm on Sundays during choir term time. It is fitting that the commission is for music to be sung at that service.

The deadline for entries is 5pm on Friday 29th November 2019.

Further information and application forms are available on the Cathedral’s website:  https://corkcathedral.webs.com/composition-competition 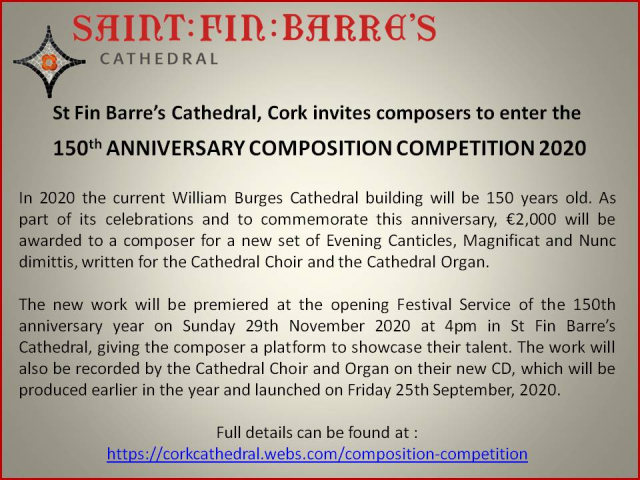 This entry was posted in Cathedral, Church Music and tagged St Fin Barre's 150. Bookmark the permalink.
%d bloggers like this: